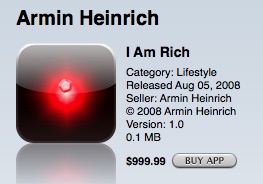 Some may applaud Apple’s decision to remove the $1000 iPhone app (the one that does nothing) from its store the other day but, in reality, it’s deplorable.

I’m not concerned about the customer service issue (because yes, people will buy it, and yes, Apple will get complaints)– I get that side of it. But this thing is a work of art. An accidental one, maybe, but still, it’s true.

The thing is a great commentary on the cost of gadgets, on social status among geeks– there are a lot of ideas in there, and now, it’s all gone.

The reason why is interesting. It’s gone because iTunes is the opposite of the web– it’s owned by a single company, and they can make things appear and vanish at will. In contrast, everything online is basically there forever, either in a Google cache or on Archive.org.

But now, this hilarious, insightful work is gone, forever. It’s this kind of thing, this tiny thing, that gives you an idea of what net neutrality really means– what the web could be to us, tomorrow.