The Hat You Wear 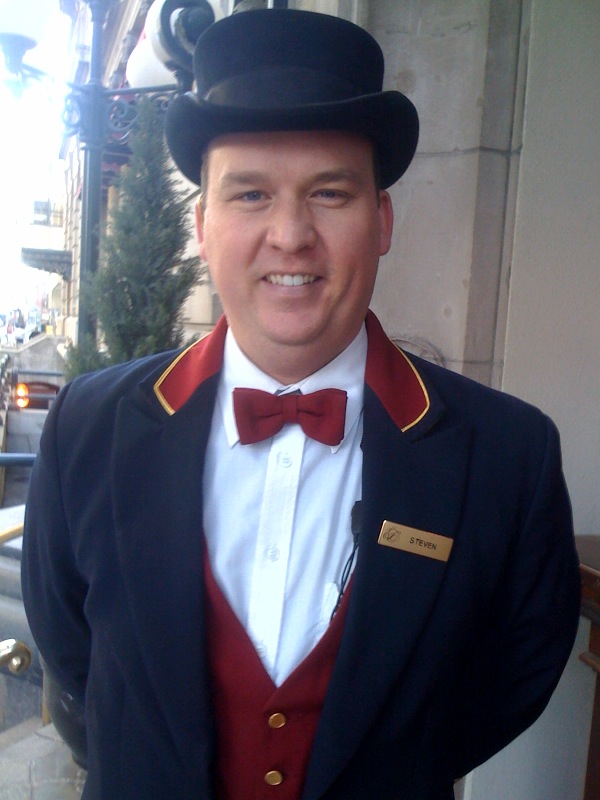 I saw this Fairmont doorman this morning in Calgary. Cute hat, right?

The hat is part of a uniform, of course, along with the coat and everything else he wears. He puts it on every day. But it’s also more than that. Every time this doorman puts on this uniform, he plays a role– one that includes his personality, but that isn’t quite him, either. The hat changes him.

We put on hats all the time. If you’re a boss, you put on that hat; if you work in customer service, you put on another. Every hat means something different, and it changes you in some way so that you can be more effective at what you’re trying to do. The doorman’s hat works because everyone else sees him differently. Think about it– how would you treat this guy if he wasn’t wearing it?

Hats in real life are actually kind of particular– more than anything other piece of clothing, they represent a station in life. Want an easy Hallowe’en costume? Put on a hat, and you’re a newsie, or a royal guard, or a spy. Nice.

I think we should use hats as a strategy. If we’re afraid, no sweat, we can put on the hat that makes us courageous. If we need to be creative, we can put on an artist’s hat, or a rebel hat. Even Tyler Durden was a kind of hat in Fight Club, now that I think about it.

Actually, I just remembered that there’s an entire book about this subject called Six Thinking Hats. It’s incredible. I read it about 10 years ago when I first started getting into Edward de Bono, a writer who has influenced my thinking a hell of a lot. You should pick up that book if you can find it.

Until then though, think about what kind of hat you could use in your life. If you need to, actually find one in real life that represents it to help you get into the role. It’s silly, I know, but the clothes make the man… so it really helps.

4 Responses to “The Hat You Wear”