The Complete Guide to Snapping the @#$% Out of It 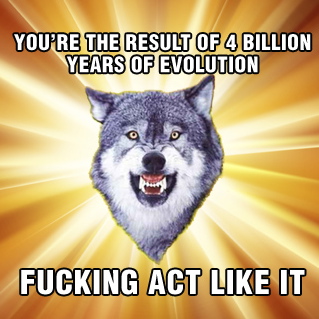 Do yourself a favour.Â This year, for once, I have a suggestion, and I’d like you to take it.

This year, this once, it’s time you used your New Year’s resolution properly for a change.

Stop screwing around with your I’m-going-to-lose-10-pounds, buy-a-treadmill bullshit. Stop with the 7-Minute-Abs, the “I’m going to blog every day” thing that everyone is doing right now. And your “I’m going to quit smoking for real this time” is not convincing anyone.

It is time for you to recognize that what you’re doing is not working.

“Great,” you may be thinking. “I agree.” Now, perhaps you will go and find people in your life who can give you a gentle talking to, such as your spouse or friends. They’ll set you straight. They can say, “come on man, you can do it,” and that’s helpful and good.

But there’s a problem. None of these people can really tell you the truth. They can’t call you on your bullshit right to your face, because that would be rude, and you might get angry at them. There are social consequences, shockingly.

But here’s the magic. On the internet, I can do whatever the hell I want. I can tell you the truth, because you don’t know me, and you probably never will. That, my friends, is freedom. I’m going to use it.

It’s time you snapped the fuck out of it. I’m here to help.

Enough screwing around. Let’s start with a few questions.

Have you ever noticed how no one ever thinks they are wrong about anything, ever? “But I might be wrong about that” may just be the most rarely uttered sentence, ever– and when it is, it’s never about things that matter. Yet at any given moment, you can examine your opinions and ask yourself “which one of these am I wrong about?”

Of course, most people will answer “none.” Most people never think they’re wrong about anything.

Now ask yourself, is it truly possible that I am totally right about everything I think, right now?

Or is it more likely, and stick with me on this one, that you are totally wrong about a lot of things all of the time, but that you never examine your blind spots so you have no fucking clue what you’re doing right or wrong at all?!

Somewhere out there, there is a man or woman just like you, just as smart as you are, just as clever and good-looking, who has the exact opposite political views, or who thinks that Ayn Rand is the greatest philosopher of our time, or something.

Yet, these people are not idiots. In fact, it is highly possible that, quite counter-intuitively,Â the idiot is you. So the first step in all of this is to consider that it’s possible that you are wrong– not a little, but a lot– in fact, that you’re fucking everything up and that you need a wakeup call. You need to get bitch-slapped, regularly, and put your arrogant ass in its place.

I include myself in that group, of course.

Q2. Hey, so how’s that method working out for you?

I know! I’ve got this new habit I want to implement and I’m going to try it the exact same way that I tried it last year, except harder! Super good idea brah, let’s do it.

If you’re the average dude, with an average system and average efforts, how do you think your results will be? You got it: average. Should this surprise you? No.

Here’s the thing: average is bullshit. You think it’s fine because you’re also surrounded by average dudes, so any small difference makes you feel good about yourself. But you need to stop fucking around. It’s still average, you know it, and you’re better than that.

Get yourself a goddamn system. Read 18 Minutes, or Making Ideas Happen, or Getting Things Done, or Bit Literacy (free!), or anything else for that matter. Get a fucking clue. Get out of your usual habits and do something different or you will get nowhere.

This is a call-out to all of my friends on Twitter who are doing the same thing they were doing three years ago. You know who you are.

Then, how did it feel when you did it anyway? Yes, exactly.

This, my friends, is the ideal state. I call itÂ the ring, because it’s the place where the fight actually happens. Those that enter are fighters, challengers, and champions— people who push their boundaries and make things happen. You cannot remain in the ring forever, because it is immensely difficult, but if you never go there, you will never have breakthroughs. Otherwise,Â your life will be a comfortable carriage ride all the way to the grave.

Q4. When was the last time you questioned your direction?

I just recently tested my genetic code on 23andMe. The results came back, and one thing that popped out isÂ that I have higher possible chance of living to the age of 100 than most people. In other words, I have a long life to lead. I eat really well, exercise, fast 16 hours a day, and generally inform myself about health, so I have a feeling I’ll be doing alright and have a lot of time.

I do not believe, however, that this potential long lifespan (or anything else) allows me to feel like I have the right to fuck around and waste my life. You can choose to ready, fire, aim if you want, but remember to adjust afterwards because you may be going in the totally wrong direction.

My father, a career counsellor, used to tell me that people had on average 7 careers in your lifetime. In other words, there’s plenty of time to change and you should consider it! For example, after 15 years or so off and dropping out of art school, I am spending more time drawing, sculpting, etc, than I have in a decade. It’s challenging but it feels good, and good accidents can happen. Haruki Murakami, one of the most respected living writers in the world, started off writing while he owned a bar. He was just trying it out.

This should also be a sign to those of you who are choosing careers based on their potential future earnings. Stop being such a tool. Go do something you actually care about– trust me, I’ve had enough conversations with successful yet miserable people. Success and money are ruts that are just as hard to get out of as being in a miserable job for 5 years.

Q5. How are you going to be changing the world?

Here’s my final point– for now, at least. I’ve spent a lot of time around authors over the past little while and I’ve started to figure out that almost all of them have one primary thing to say, a single idea that they are really about. Seth Godin could be “be remarkable,” applied to multiple different formats. Tim Ferriss: “most effort is wasted– do what matters.” Pema Chodron: “Drop the storyline.” I could do this all day.

Here’s the thing: authors have to write down their ideas and express them differently. It’s their job and they have to work at it, so they get many ideas in their head and stick with those that matter to them (or sometimes those that sell– sigh). Point being, even non-authors need to figure this one thing out. But most never think about it. They plod along without much direction or grand goal at all– and if it is, it’s often rather selfish.

Again, I include myself in this.

Here is my suggestion: If you had a TED talk, or some other grand idea, how would you present it? Think about it. This is your one chance. How would you use it?

Or, optionally, if you had to leave something behind, if you were going to die and be entirely forgotten but could change one thing, what one thing would that be? Would you be like Bill W and start something to help alcoholics all over the world? Would you solve a technical problem or a social one? Think about it. OrÂ write about it, it’ll help you figure it out.

Ok, now that you have the answer, or at least you’re thinking about it, here’s the real focus.

Q6. Why would you work on anything else but what actually matters?

I leave you with that.