Why You Should Quit the Internet Life is a series of decisions, one after another. When put together, they make you who you are.

Each decision is a bet.Â Some are made consciously; others not. Each bet you win shows you what you’re capable of, and what your next bet should be. As you win more bets, you get more ambitious. This is a good thing.

Here is an ambitious bet I just made that I think will interest you: in May, for 30 days, I will be quitting the internet.

Instead, during this time, I will be walking an 800 kilometer, thousand-year-old pilgrimage route in Spain— one that many people have walked or dreamed to, from Paulo Coelho to American President John Adams.

It’s something we’ve been planning for almost six months.Â It’s pretty cool to be on the cusp of a big trip like this.

But this post isn’t about my personal quest. It’s about yours.

Do you have something to quit the internet for?

Why you should quit

Our brains are not wired to be made happy by the internet. Our emotions, like fear and joy, are based in a primal understanding of the world. This is something we can’t escape.

Saying the web is important to your life is like saying that television is important. It might be social, sure, but it’s still media. It can help connect but it also divides in a very fundamental way.

Touching a screen isn’t the same as touching a person.

The best stuff happens outside the web. Outside is new and frightening, not comfortable. Encountering pain helps transform your vision of yourself and forces you to grow.

And there is very little that is new and frightening on the web. The biggest realizations happen when you are in free-fall, not when you have a safety net.

Happiness is not related to Twitter feeds, blog posts, or even books– although books doÂ get closer. What happiness is connected with is unique human experience, often untranslatable into any other medium. Much like Jacques Derrida’s ash or Zen,Â the quiet and the sacred have no way of speaking for themselves other than personal experience.

So, personal experience is what we must seek out. It’s personal and rare, so unlike what’s easily accessible (the web), it’s valuable.

Why you need a quest

But your life needs one. Your existence needs a purpose. For now, I have one. It helps me think about the future and will give me time to think and consider what’s important.

It may interest you to do something like what I’m doing– or you may find it boring. You may have some inkling of what your quest should be, or you might have no idea. It might be crazy and amazing to others, or it might be entirely mundane to them. No matter, becauseÂ it’s your quest, not theirs.

It doesn’t need to impress anyone but you.

Sarah Marquis has walked over 30,000 kilometers in the past 20 years. As we speak she is walking from Siberia to Australia.

Paul Nicklen goes to the coldest, most miserable parts of the world to photograph and document the animals that live there.

Brett Rogers makes documentaries about rivers by traveling down them in non-motorized craft.

Shea Hembley leaves drawings in nature for people to find, like secret messages.

How to find inspiration

The examples above are just from TED conferences I’ve attended this year, they weren’t hard to find or anything.

But isn’t it interesting how the examples I mentioned all came from people going to tough natural environments? If you’ve been here a while, you probably already know this about me. I love nature,Â earthworks and endurance. It’s all right up my alley.

You probably have stuff that’s similar. Do you remember what it is? Often, ideas like these are so buried that you have no idea what you actually care about anymore. Or, you do remember, but don’t realize how long it’s been since you thought about it.

You can do this by performing certain exercises– removing boundaries like money,Â dependents, or the amount of possessions you have. Some people say you should write ideas down until you cry.

But this isn’t about finding your one great idea. It’s only about taking one single step forward, which isÂ much easier.

Why we climb mountains

Quests in movies always go the same way. The hero is seeking enlightenment, or vengeance, or peace. He has to find someone to teach him. He seeks out this person on the top of a mountain or desert– that is to say, a hard place to find. This is a metaphor for how we find clarity and learn new things. It’s hard.

I’ve talked about this before, but it’s worth mentioning again. The stories in our lives inspire us because they are foundational to who we are. And we learn from them what steps we should take in own quests, and where we should go next from where we are.

Joseph Campbell listed a these steps in the Hero’s Journey. Have you ever seen them?

Where are you in here? Do you recognize yourself? Most people get stuck around number 3. Some are later, but not many. Are you one of them? If so, why are you refusing?

Are you stuck at number 7? This is your darkest hour, when you feel that you should give up and quit. It’s another major departure point from the quest, but in order to complete it, you have to go forward. It’s also what Seth Godin calls The Dip, but it’s universal. Have you been tested? Did you succeed?

Some people are at number 1 and have never considered anything outside the corridor they have lived in. Do you know any of them? Well, here’s a secret– most people who seem this way are in fact not here at all. Almost everyone is actually on a quest; they’ve just refused it, or have forgotten it. A temporary sidetrack.

To understand is to perceive patterns

I just got a deck of Pattern Seeker trading cards in the mail from the amazingÂ Imaginary Foundation. On the cover is this message: 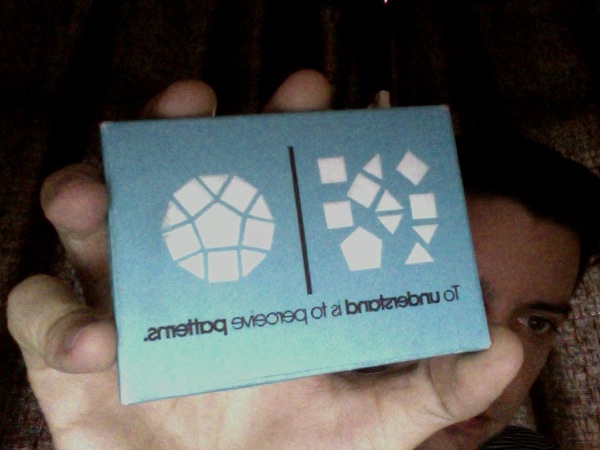 Look, your life has patterns, or corridors, that you need to know in order to become better. You feel pain when you leave the corridor because it is the unknown. In fact, pain might even be a signal that you are on the right track. But in order to see, you need to know what your patterns are– both good and bad.

If you have nothing better to do than spend time on Facebook or hang out at the old bar, your life may need some serious adjustment. If you don’t care about what you’re doing from day to day, or if every day seems like the last, then your whole life will be like this. You have refused the quest. You are done.

With growth and flexibility comes life; with rigidity comes death. This is a truth that expands to all living things. Your body knows this, so you should too.

The easy is not worth doing; only the hard is. It is your exposure to the new should become the norm, and your return to the old should be comfortable, but brief.

Seth Godin recently told me by email that the most important time in any project is the point at which you decide, unequivocally, that it will ship. Before that, it’s just an idea you toy around with.

Think of a relationship. Things are beautiful and perfect when they are new or aren’t real yet– but that’s preciselyÂ because they don’t exist. Once they become real, they get messy. That’s what happens when something goes from the imagination to actual existence.

Ideas, in fact,Â aren’t worth much. Everyone has them, even geniuses, but only those who deliver have an impact, and only those who know themselves are able to deliver.

Why you should act stupid

Act as if you are stupid. Read in order to learn something, then act as if you’re stupid again and read more to make see if you’re right. Then go out into the world. Assume you will fail, but accept it, because it will make you less stupid.

Think this paragraph is funny? Well, it is, but it’s also true. What we know is vastly dwarfed by what we do not, but we act as if the patterns we recognize are all that life is or can be. This is wrong– this is actual stupidity.

If you want to be smart, you have to begin by being stupid. The hard part is staying that way.

All on the path are brothers

A few months ago, a friend pointed me to this essay from Julian Assange’s old website. I remember thinking a lot about it. He had a quest, and in a way, it doesn’t matter what it was. It only mattered that, when he really looked at himself, he was doing what he thought was best for the world.

Because, if you have a quest, then all of the suffering makes much more sense.

If you have a goal, then a lot of the actions you need to take become much clearer.

Even if your goal isn’t perfect, that doesn’t matter. What matters is that it’s better– even 5% better.

But in fact, you will be more yourself than you ever were.

I remember when I started in 2003, I didn’t think I was a writer at all. I did podcasts because I considered myself a verbal person. Well, I’ve changed.

When I began, I wrote bullshit, self-interested posts that were based on people thinking that my life and myself were interesting. On my show, I played a bunch of hip-hop music. It turned out that what people wanted to hear were my opinions. So I talked more.

The result, I guess, is where I am now.

This blog is now about growth. I’ve said I’d like to be unrecognizable in five years. I’d also like the same for you.

So I’d like you to subscribe. Why? Because quests are important. Top 10 and Twitter posts are not, but they are loud, so they seem that way. Often, the stuff that’s important is quiet. It isn’t obvious.

Your quest is quiet but important. So is mine. Hopefully, we’ll learn something, chat about it, and help each other along.

Filed by at 9:42 am under challenge, direction, projects, risk

104 Responses to “Why You Should Quit the Internet”